This article examines the factors which  may have contributed to this woeful performance and explains the author’s view that “the rest of the story” indicates MRMD’s stock price should rebound going forward.

Over the past three months, I’ve reviewed the financial statements of more than 50 companies in the evolving cannabis/marijuana sector. Many of these companies recently went public in Canada because of less stringent listing requirements and lower costs. Many of these start-up companies have scant sales coupled with substantial start-up costs and negative “bottom lines.” Their lack of an adequate capital structure coupled with management teams that lack substantial industry knowledge does not bode well going forward. Marimed Inc (OTCQB:MRMD) distinguishes itself from many other companies for a number of significant reasons addressed in this article. The company came to my attention via the following August 12, 2019 press release headline:

Based on these jaw-dropping percentage increases, I became interested in “the rest of the story” as the iconic Paul Harvey would tell listeners of his popular radio show. Let’s take a peek behind the curtain to see what I found and why my view is that the company’s stock price is due to rebound shall we? But before we do, here’s a brief overview of MRMD.

The Company was originally incorporated in the state of Delaware in January 2011 as a wholly-owned subsidiary of Worlds Inc. (formerly Worlds.com Inc.) under the name Worlds Online Inc. In May 2011, Worlds Inc. commenced the spin-off of the Company, which was consummated after Securities and Exchange Commission (“SEC”) review in May 2012.

During the first half of calendar 2017, the Company changed its name to MariMed Inc. and its ticker symbol to MRMD. Also, during this time, the number of authorized shares of the Company’s common and preferred stock were increased to 500 million and 50 million, respectively, and the Company purchased the remaining 49% interest in MariMed Advisors Inc. in exchange for 75 million shares of common stock.

MRMD is based in Norwood, MA- the state where I call home. The cannabis/marijuana industry has become a political football here regarding legislation and policy actions on both on a state and federal level. Governor Charlie Baker (R-MA) supports the state’s Cannabis Control Commission and has deferred to them on regulatory matters.. Democratic presidential contender Senator Elizabeth Warren (D-MA) “ regularly and forcefully champions cannabis legalization in Congress—often framing it as a social justice issue” and according to the Huffington Post she has “cited racial disparities as a major reason for that stance.”

The stock has clearly been under selling pressure for most of 2019 and currently trades at $1.04, down 68% YTD as this chart shows:

Let’s review the relevant key financial metrics of the 6 stocks that SeekingAlpha classifies as MariMed’s peer group and compare how they have performed in 2019.

As the table above indicates, MRMD’s stock price has significantly under-performed every other stock in their peer group. Now let’s track the company’s financial performance compared to the stock price, OK? Marimed Inc. closed at $3.25 on 12/31/18. On 4/17/19 the company reported strong revenue and EBITDA growth as follows:

Despite these impressive results, the stock drifted ~15% lower and traded at $3.15 when MRMD reported strong 1st quarter results on 5/13/19 :

Although Q1 results represented a major milestone for the company, MRMD’s stock price had suffered additional significant downside pressure by ~ 47% to $1.67 on 8/12/19 when the company reported blowout numbers for Q2 as I stated earlier. That leads us to the next chapter of this saga.

The company currently has a satisfactory current ratio of 1.5 based on current assets of $48,056,007 and current liabilities of $31,083,282. But the “rest of the story” is largely explained by the following material set of events which skew the financial analysis results:

During the quarter ended June 30, 2019, the Company entered into several hemp seed sale transactions with GenCanna, a related party, whereby the Company acquired large quantities of top-grade feminized hemp seeds with proven genetics at volume discounts that it sold to GenCanna at market rates. As previously disclosed in Note 1 – Organization and Description of Business, the Company classified the $25.2 million due from GenCanna as a receivable from a related party, with $22,0 million recognized as revenue from a related party for the six months ended June 30, 2019, and $3.2M recorded under Unearned Revenue From Related Party on the balance sheet. When GenCanna makes its payments to the Company in December 2019, the amount in Unearned Revenue From Related Party will be recognized as revenue.

Marimed’s decision to provide extended payment terms to GenCanna (in which they have a 33.5% equity interest) had a temporary negative effect on the company’s cash position. However, I do not consider this situation a headwind of a small craft advisory proportion as MRMD has clearly stated that it will be resolved in Q4 as shown above. 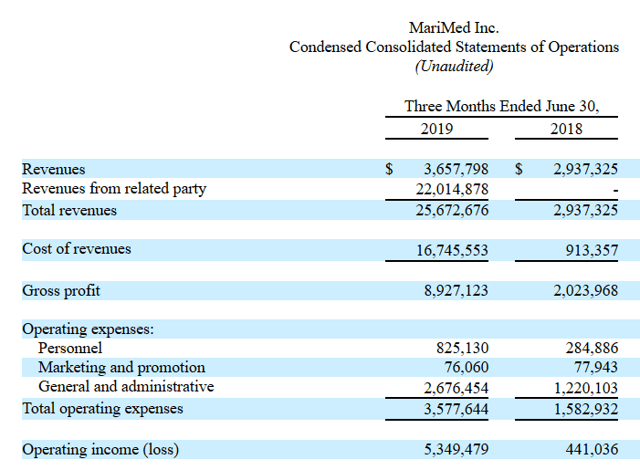 As the above data indicates, the company’s gross margin decreased significantly from 60% in Q1 to ~35% in Q2. The reason for this decline of 40+% is due to the ~83% o f Q2 sales that were from GenCanna were at a much lower margin than the ~17% sales from non-related parties. Although there was only a 4% increase in sales to non-related parties in Q2 ($3,657,798 vs. $3,515,815) the author is encouraged by the company’s press release of August 12, 2019 which stated “the ongoing consolidation of our operations in six states will significantly expand revenues beyond simple organic growth in the second half of this year and in 2020. In addition, the company’s SEC filing of August 9, 2019 stated that in July 2019, the Company delivered and billed GenCanna an additional $8.0M for hemp seeds that were purchased by the Company for approximately $5.0. This transaction is expected to be a Q3 event, and will likely have a material positive effect on Marimed’s financials.

Marimed stock has clearly under-performed in 2019, as the price has declined ~68% from $3.25 on 12/31/18 to $1.04 on 9/17/19. This is in sharp contrast to the financial and operational milestones that the company has achieved in both Q1 and Q2. The author surmises that perhaps a contributing factor to the stock’s weak performance that many investors either may not read or fully understand the company’s SEC 10-Q filings which explain the complexities of the related party transactions with GenCanna. As the foregoing discussion has shown, all three of the company’s basic financial statements- the condensed consolidated balance sheet, the condensed consolidated statements of operations and the condensed consolidated statement of cash flows were adversely affected by the extended payments terms associated with the seed sale to GenCanna. However, since MRMD has said that it expects full payment in Q4, I believe that the $25.2M due from GenCanna is essentially a timing difference of no undue concern or risk. I also believe that the tier change to the OTCQX announced on 8/15/19 will increase visibility and interest in the company.

Therefore, in my view a rebound of MRMD’s stock price is appropriate based on “the rest of the story” and worthy of a representative percentage of an investor’s speculative portfolio.

Disclosure: I/we have no positions in any stocks mentioned, but may initiate a long position in MRMD over the next 72 hours. I wrote this article myself, and it expresses my own opinions. I am not receiving compensation for it (other than from Seeking Alpha). I have no business relationship with any company whose stock is mentioned in this article.